You have declined cookies. This decision can be reversed.

You have allowed cookies to be placed on your computer. This decision can be reversed.

Definition of the project

The hospital has already introduced an integration-system (telemedicine-System) for one of their ORs.

The system is able to display all used camera-sources (endoscopy, microscopy, vital-signs, OR-light camera) at the monitors inside the OR, transmit the signal to the lecture hall (video conferencing) and record still-images and videos from the used camera-sources. Unfortunately the system is not able to import the scheduled patient-data and is not able to export the recorded media to the central image management system (PACS), due to incompatible software-interfaces.

For an optimal workflow, the hospital is looking for a solution, which enables the integration-system to import the scheduled patient data and export the recorded media to the central PACS.

HCI is offering a "DICOM middleware" Health Network-Connect which will be installed "between" the hospital's IT-infrastructure and the existing integration system. Health-Network Connect is a customizable software-interface which is able to receive the patient-data from the HIS or RIS and translate the data for the integration system. 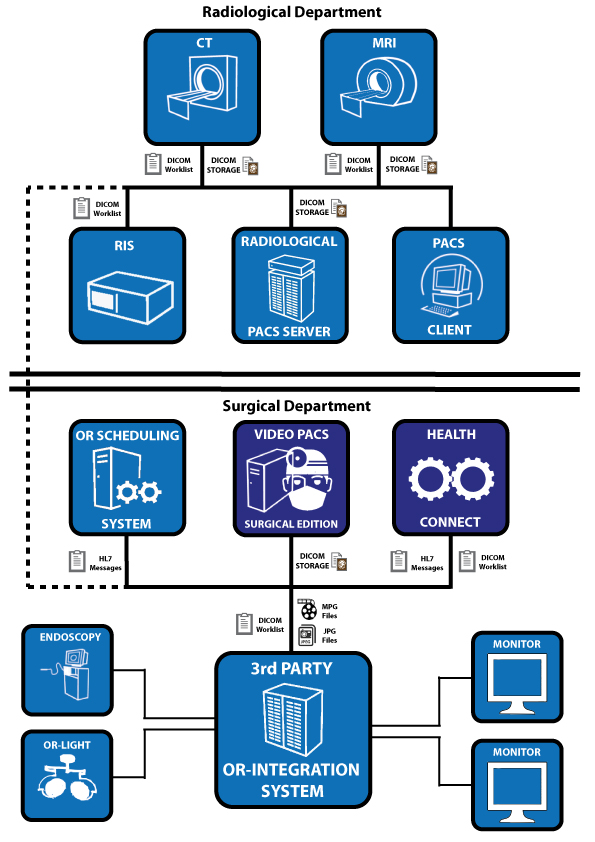